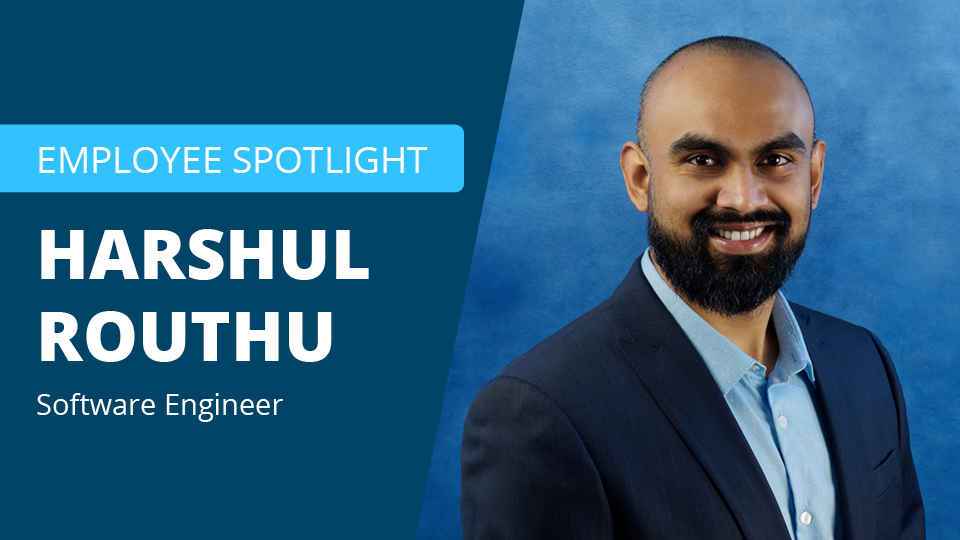 Favorite spot he has visited: Yellowstone (If he truly could only pick one answer)

“My voice is being heard everywhere,” Routhu said. “I’m part of the process, rather than following the process. I’m able to give my input on process definitions.”

Routhu was also looking for new challenges and somewhere he could quench his thirst for learning. Soon after he arrived at the company, he was immersed in his first learning opportunity at CloudSaver: helping change all the back-end code from VB.NET to C#. This change was made to modernize from the more-dated VB.NET programming language to the more-contemporary C#, which has more support and more users.

And now he is immersed in another welcomed challenge; CloudSaver is upgrading the architecture of its system in preparation for future upgrades.

“Now we are working on a completely new platform where everything is new and everyone is learning new stuff,” Routhu said.

He said all his teammates are working together and sharing ideas, so everyone’s experience and opinion is valued. Routhu is a fan of such collaboration at CloudSaver and how well his team works together. He describes his team as “a bunch of passionate kids” who approach their jobs with enthusiasm no matter how much experience they have in the field.

“Some of them have 20-years to 30-plus years of experience, but when they are talking about something new, everyone is equally excited,” Routhu said. “It’s not like [anyone says] ‘I have the experience, I should know this.’ It’s nothing like that. Everyone acts like a kid in a candy store. Everyone is very passionate about what they are doing.”

Outside of the CloudSaver office, you will have a hard time finding Routhu indoors.

“I’m a big sports guy,” Routhu said. “In the summer, I will always be outside. I would prefer to be outside. On weekdays, I’ll be running. On weekends, I’ll be playing cricket, and sometimes if someone calls me up, I’ll go play softball, pickleball or badminton.”

He also loves road trips, hiking in the mountains or just sitting on the beach. Spot a theme? If the activity occurs outside, chances are good that you’ll spot the self-proclaimed “total outdoor guy” Routhu there. Last year, he went on a 15-day solo trip along the east coast. This year, he wants to do the same on the west coast.

“There’s nothing planned for now, but I usually do it in October because my birthday is in October,” Routhu said. “On my birthday, I just want to roam somewhere. So it will either be driving west or going to Hawaii.”

Well, there is one thing Routhu will spend time indoors doing, and it’s something he says a lot of people don’t know about him. He enjoys playing chess in his free time, and he’s pretty good at it too.

“With the kind of personality I have, if someone new comes [they would think] there’s no way this guy has the patience to play chess,” Routhu said. “I played at a semi-pro level in my high school. I had an international rating at some point, but then I moved to a different state in India, so I lost that touch and there was no coaching, so I stopped playing.”

In 2014, Routhu moved to the U.S. to continue his education. He earned his master’s degree in Computer Science at the University of Kansas and fell in love with the region. He also has family around Kansas City, so it seemed ideal for Routhu to stay in the area. Now he is working hard at CloudSaver and making his personal impact on the company. CloudSaver is growing and advancing and Routhu is right in the forefront of it all, giving his input on developing processes.

“[At my previous company], the team was large, and I hardly ever had the opportunity to talk about processes,” Routhu said.  “Here we are still figuring out what the best process is, and I’m getting involved in that. That’s really refreshing and unique.”